The "Collaboration Generation" and the Legal Profession

MyCase Blog Home » The "Collaboration Generation" and the Legal Profession 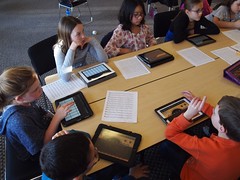 These days you can’t throw a stick without hitting someone who is discussing the effects that the Millennial generation is having–and will have–on our culture, on business, and on the legal profession. But will it be the Millennials–or the generation that follows them–that will fundamentally change the way that business is done?

Although definitions vary, most agree that Millennials are made up of those born after 1980 and one of the defining characteristics of this generation is that its members can’t recall life without the Internet. But, as this recent readwrite post explains, my generation, Gen X, is pretty adept with computers as well. In fact, when it comes to time spent online, we rule the roost, while Millennials are more mobile:

So, in many ways, Gen X and the Millennials really aren’t all that different when it comes to their use of computers. For that reason, I suspect that it  will be the choices and experiences of the next generation–in my opinion, the true “digital natives”–that will fundamentally change the course of our society and therefore, of business. Astute lawyers would be wise take this generation’s influence into account when positioning themselves to compete for legal services in the next decade.

But, before I delve into that idea further, let’s talk about this generation. Most contend that the cut off date for the newest generation is approximately 2000 and that those born after that date constitute “Generation Z.”  I believe that what truly defines this newest generation will be that they never knew a world where social media and online collaboration were not the norm.

So, while  Millennials were defined by never knowing a world without Internet access, what will define this next generation is that for them, online interaction and collaboration will be inherently comfortable and familiar and will be the default rather than exception. For that reason (and because the next generation will be letter-less at this rate!), I would argue that the “Collaboration Generation” is a far more apt description than “Generation Z” for this newest generation.

My 8 and 10 year old children are my best source of proof for this theory. They cannot imagine a world without smart phones, Google, instant access to information, and online collaboration . That’s why when my 8 year old recently asked my husband how old he was when he bought his first cell phone and he replied, “25,” her eyes widened and she said, “Wow Dad you must have grown up in ancient times!”

For my children, connectivity with people worldwide is their reality. Both of my children rarely watch television and instead stream videos via YouTube, Netflix, or Amazon Prime. Both are adept at using computers, are extremely familiar with browsing the Internet, and frequently participate in kid-safe online communities.

They view videos and content created by people worldwide and regularly see comments in languages unfamiliar to them. Not only that, but my 10 year old has repeatedly asked for–and been denied–permission to have a Facebook account or create her own YouTube videos, and both of my kids are aware that I create web content that is immediately available for viewing. For them, online interaction, creation, and consumption are the norm.

This has become even more evident now that they both own Kindle Fire tablets, which they received for the holidays. They use their tablets all the time for activities ranging from streaming videos and movies, downloading apps, playing games, and reading books. Collaborating as they do these things is just part of the experience for them.

For example, they will rate and leave comments on YouTube videos, rate apps, and, as I learned from sharing an Amazon account with them, rate books (in my name) after they’ve finished reading them, as my 10 year recently did:

This review is from: Warriors: Omen of the Stars #6: The Last Hope (Kindle Edition)

Even though it is the saddest book I have ever read I loved it. (SPOILER ALERT BIG TIME)
It is sooooooo SAD that Firestar dies and I don’t cry over books but this one made the tears come to my eyes when Mousefur and Hollyleaf AND Frostfur died. The big face off between Firestar and Tigerstar was epic but when Firestar died and Sandstorm was SAD IT was realistic and you could feel the clans grief if u have reed and reread the Warrior series. A big thumbs up to Erin Hunter for this AMAZING master piece.

When I received my first email advising me that a review had been posted to my Amazon account, I was surprised (and slightly horrified by the spelling and grammatical errors attributed to me).

Of course, after thinking about it, I quickly realized that her foray into online rating and collaboration was anything but surprising. In fact, it was entirely predictable and unremarkable because it was a natural extension of her worldview. Like most children of her generation, she doesn’t simply consume entertainment. She experiences it and shares her opinion with the world.

That’s the reality of the Collaboration Generation. You read something that you enjoy and then you share your experience. You watch a video or movie that is horrible and then warn others to avoid it. Unlike prior generations, these kids aren’t passive consumers–they’re collaborative users and creators. That characteristic is what defines this generation and will affect they way that they–and everyone else–conducts business.

Richard Susskind discusses this idea in his most recent book, Tomorrow’s lawyers: An introduction to your future, wherein he explains how technology and the online world is transforming business, including the business of law and how the legal field, beginning with our legal training, is simply not keeping up. I’m currently reading a review copy of this book and will write about it soon, but the Legal Futures blog addressed the concepts discussed in his book in a blog post from last July, which discussed Susskind’s recent comments about his book at the LawTech Camp in London:

He continued: “What are we training in huge numbers young lawyers to become? Traditional, one-to-one, bespoke face-to-face consultative advisers who specialise in individual jurisdictions and charge by the hour? Yes… (Instead, are we training them to be) (m)ore flexible team-based hybrid professionals able to transcend legal boundaries and motivated to draw in techniques of modern management and information technology? Hardly ever anywhere in our world. We’re teaching lawyers to be something they no longer need to be.”

In other words, the effects of collaborative technologies and the flattening of the world are inescapable. Businesses must incorporate this newfound reality into their long term plans. The legal profession is not immune from this phenomenon and astute members of our profession will envision ways to re-create the practice of law from the ground up, beginning with legal training, so that lawyers will thrive in the future, instead of failing. Because competition–from lawyers and non-lawyers alike–will be fierce. Keep up or pay the price.