Cloud Computing:
Business as Usual in the Face of Disaster

MyCase Blog Home » Cloud Computing: Business as Usual in the Face of Disaster 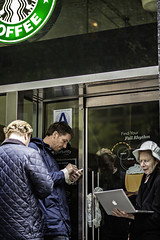 Last week, Hurricane Sandy pummeled the East coast, leaving a trail of destruction in her wake from which many in New York City and New Jersey are still struggling to recover.

Where there’s wifi, there’s a way

Yet even in the midst of the devastation, where there was wifi and power, there were residents in tow, doing their best to conduct business as usual, as described in this MailOnline article:

Chase ATMs, branches of Duane Reade drugstores and in fact anywhere with a spare electrical outlet have become mass meeting points crammed full of people – some smart enough to bring extension cords – to power up their device

Large crowds have also been spotted outside branches of Starbucks, which conveniently has left its Wi-Fi open despite closing all of its stores.

Because where there’s wifi, there’s a connection to the outside world–and access to all of the data that you have stored in the Cloud. That’s why Hurricane Sandy’s aftermath is a great example of one of the most useful benefits of cloud computing: the ability to quickly and easily access your data, no matter where you are or what time of day it is, as long as you have an Internet connection.

The Cloud saves the day

The reason this is such a selling point for cloud computing is because it’s impossible to predict when you might lose access to your office, whether because of a natural disaster or otherwise.

For example, I recently spoke on a panel about cloud computing for the New York State Bar Association. One of my co-panelists was a NYC lawyer who switched his firm over to cloud computing after losing access to the servers housed in his law firm’s office, which was located in the Empire State Building. He explained that building management advised tenants on a Friday that power would be out all weekend for scheduled maintenance. That meant that he was unable to remotely access his firm’s data for the entire weekend. Shortly after that happened, he moved his firm’s data to the Cloud and hasn’t looked back.

Now, his law firm, just like other businesses who store their data in the Cloud, has a built-in disaster plan in effect, as explained in this CRN post:

Although Hurricane Sandy slammed into the East Coast this week, creating widespread damage, cloud networks held up for the most part.

The very nature of cloud computing — the ability to host data center assets off-premise in remote, distributed data centers — can protect data from a disaster, even if it’s a hurricane that spans several hundred miles.

“One of the most understated use cases for the cloud is disaster recovery,” said Zeus Kerravala, founder and principal analyst with ZK Research, a networking and cloud research firm. “The cloud is built for back up and recovery, with geographically disbursed networks.”

It is the design of the newly built, cutting edge, cloud computing data centers that makes all the difference, ensuring that even in the face of a large-scale geographic event like Hurricane Sandy, built-in redundant data back up will save the day. In fact, as explained by a Verizon representative in this GigaOM post, cloud computing data centers are often designed with disaster recovery in mind:

Telecommunication giants like Verizon are the rule, rather than the exception. Any reputable provider of business cloud computing services should have redundancies built into the services that they provide, thus ensuring that their customers rarely, if ever, lose access to their data.

Built-in redundancies are the key to success

For example, MyCase does just that, as we discussed in this September post where we explained all about the multiple redundancies measures built into our platform in order to ensure that our customers receive the best service possible.

Let’s face it–no form of technology is perfect. Inevitable downtime is a fact of life. Even so, your end goal should be to make the best technology decisions for your law firm–decisions that will ultimately enhance flexibility and mobility, thus making it easier to access your firm’s securely stored data, no matter what the circumstances–even in the face of a hurricane like Sandy.