Today’s guest post was written by Rick Georges. You can learn more about him at the end of the post. 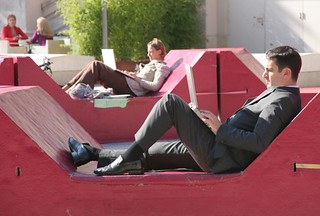 If there is any definite trend in technology for the law office it is the movement to mobile lawyering and web based computing. Lawyers, for some time, have discovered the freedom of having access to their tools wherever they happen to be. In the past, mobile access meant communicating with servers locked in a closet at a fixed geographical location back at the office. Many software programs and solutions were aimed at keeping complicated server systems up and running, and then finding Internet connections at remote locations.

These days, the increasing power of smartphones, tablets, and thin, light notebook computers, and rapidly developing web based law office management software systems, and the proliferation of web based file storage and access at Internet server farms, have accelerated the change in lawyer behavior.

As these systems become more sophisticated and useful, more lawyers and law firms will find the lack of need to keep software updated, and the seductive ease of having access to all data for the practice from any device and any location, to be irresistible. In time, we will wonder what all the fuss was about.

Of course, the security of the data and processes is the responsibility of the lawyer using mobile systems. The security issues will be the only bump in the road to mobility; but, there are strategies to combat the problems. First, password access to all systems. Second, two factor authentication tied to a physical device in the possession of the user. Third, a security protocol at the server end, with cryptographic and physical security. As with the increased functionality of the user end systems, I fully expect providers to invent new methods of data security. After all, their companies’ continued survival depends on it.

The mobile trend itself will also be developing, as wearable computer and smartphone accessories begin to become more attractive and usable. This trend will merely be an extension of mobile access to law office data and programs, however, and will bring us closer to an age when being a productive  lawyer will be an all the time, everywhere, experience.In some quarters, there is a fear that computers will make lawyers irrelevant, as expert systems are developed that do not require lawyer intervention. Some industries are finding that challenging; but, I don’t think that the time and advice of lawyers will become unnecessary. If anything, the advice of a lawyer will be enhanced by further developments in technology.

Alice, we aren’t in Kansas anymore.

Richard M. “Rick” Georges is a practicing, solo lawyer in St. Petersburg, Florida, and a blogger about technology and whatever else interests him at the moment, at Future Lawyer. He is most proud, however, of his poetry and family, both of which are more important to him.

A MyCase President’s Day Offer – Subscribe Now and Save!

Friday Funnies: Judge Holds Only Non-Perishable Items May Be Filed With Court

A MyCase President’s Day Offer – Subscribe Now and Save!

Friday Funnies: Judge Holds Only Non-Perishable Items May Be Filed With Court