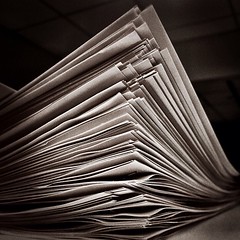 (Photo credit: jenni from the block)

Today’s guest post was written by Ron Dolin. You can learn more about him at the end of the post.

There has been a lot of talk over the last few years regarding the Unauthorized Practice of Law (UPL) and use of technology – in particular, document automation systems (legal document management software). A common topic is whether or not using document automation in a law practice without an attorney’s review goes against UPL statutes. For example, suppose that a client would like to know that a document automation system conforms with a licensed attorney’s guidance. If an attorney implements the automation system with their own legal practice logic, then one could guarantee that the final product is the same as what an attorney would produce manually. The key is making sure that the automated system follows the same procedure that a lawyer would use, and to make sure that any kind of deviation from the process be monitored and flagged.

Take search as another example – we use an index structure that automatically pulls documents for us based on our given queries in a fraction of the time it would take to physically comb through documents to find the same information. Imagine how slow search would be if we had to search every document for every query. The index accurately represents the text in a search-efficient structure.

Like search indexes, a properly designed document automation system can be a form of simply extending a lawyer’s analysis – one that removes the need for manual document construction and increases efficiency with an automated formula. If a lawyer designs the document process rules, the software is then executing, at least in principle, with authorized practice of law.

When it comes to actual implementation, there is a layer of complexity that goes beyond the lawyer’s initial automation formula. The issue lies in the analysis of the client’s information – how do you make sure the software doesn’t go beyond the limited scope for which it was designed? If a system uses something along the lines of a checkbox system for “yes” or “no” questions then we can be fairly confident with the document analysis. However, if the document system uses Natural Language Processing (NLP), which uses a form of artificial intelligence, then there is a greater chance it will be less than 100% accurate. In that case, we can’t be positive that a lawyer wouldn’t take a different action than the system; thus using NLP likely would fall under UPL. This also applies to document automation systems that are built but never approved by a lawyer in the state where it is used. In that case, I’d want to limit its scope to something closer to just filling out a form.

This is just one example of the boundary between automation and manual legal work, and how the application of different technology to accomplish the same goal can have legal implications, both in terms of the client’s final work product and ensuring compliance with ethical guidelines. For those reasons, it is important to understand how your system works and where it falls on the line of legal compliance if you plan to make a document automation system available without attorney review. In other words, using the right technology can make all the difference.

Ron Dolin, J.D., Ph.D., teaches legal technology and informatics at Stanford Law School. Dolin is also an adviser to the UC-Hastings Privacy and Technology Project as well as its Science and Technology Law Journal. He is a member of the executive committee of the LPMT section of the California Bar.

"What’s a Boy To Do?" and Other Appellate Brief Writing Faux Pas

"What’s a Boy To Do?" and Other Appellate Brief Writing Faux Pas