Mobile Computing:
The Interface of Choice for Busy Lawyers 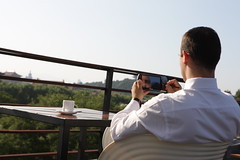 There’s no doubt about it–mobile computing is on the rise and smartphones and tablets are quickly becoming the preferred interfaces of choice. In fact, according to Kevin O’Keefe at Real Lawyers Have Blogs, last year smartphones use overtook that of regular mobile phones, crossing the 50% mark for the first time (ComScore Report).

And, mobile interfaces are quickly catching up to desktops as the interface of choice, with 37% of people using mobile devices as their preferred interface. So it’s not surprising to learn that as far back as the fourth quarter of 2010, the smartphone market surpassed the PC market, selling 101 million mobile devices compared to 92 million PCs (IDC).

But how are mobile devices being used the most? Research shows that search and email lead the way when it comes to smartphone usage. In fact, 53% of U.S. consumers are using their smartphones every day to conduct searches and there was an 80% increase in the number of emails opened using smartphone and tablets during the first half of 2012.

Lawyers aren’t immune to this trend and are jumping on the mobile bandwagon as well as reported in the American Bar Association’s 2012 Legal Tech Survey (available for purchase here).

According to the report, a whopping 89% of lawyers now use smartphones. And, one of the most drastic increases in lawyers using mobile tools was the surge in the number of lawyers using tablets. That percentage nearly doubled over the period of one year, with only 15% using tablets for law-related tasks in 2011, with that number increasing to 33% in 2012.

That’s why we conducted a recent survey of MyCase mobile users–so that we could learn more about the features that were most important to lawyers and could better understand how our customers used MyCase’s mobile app to run their law practices.

First, we learned that the majority of mobile users accessed the app at least once every day, most often in court. The second most popular place to use the app was while traveling, whether by train or car.

Access to the calendar while on the go was important to the majority of respondents, with access to time and expense entries coming in second. Document access was also important to those surveyed.

We learned a lot more from this survey and we’ll discuss our findings in depth in a later post. But suffice to say, the mobile interface is undoubtedly the future of computing. Gone are the days where lawyers are chained to their office and desktop. Instead, with cloud computing and mobile devices at their disposal, lawyers can bill, access important information, and communicate with their clients on the go, no matter where they are. That’s the beauty of the modern law office and practicing law in the 21st century–and cloud and mobile computing make it possible.

Best Apps for Lawyers: What Should Be On Your Smartphone or Tablet?

Best Apps for Lawyers: What Should Be On Your Smartphone or Tablet?